← Nailing things down
There are Ratings for a Reason – Gamer Parenting →

The E3 Experience – Media vs Attendee

(Note: This is a rundown of my ENTIRE three day experience, but contains no spoilers, interviews, or news of any sort. If you’re looking for something like that, head on over to Senshudo TV.)

This year I was able to go to E3 for the third year. Once again, it was a great experience, however it was different than the other two years I attended. This year, I didn’t have a media badge. As freeing as it was not to have a schedule to attend to, there were some downsides.

As media, there is a schedule. There are interviews to go to, people to meet, and specific games you almost HAVE to cover because of their popularity, whether you want to or not. As an attendee, you’re free to move about as you please, going to whichever booths tickle your fancy. On the other hand, as media you get behind the scenes, and you don’t have to wait in as long of lines as attendees. Ultimately, I enjoyed being media over an attendee, even if you have to sacrifice some of your freedom of choice, it’s worth being able to talk with some amazing people. And, let’s be honest here, it’s cool to play the games early, but is it really worth waiting in line for 2 hours so you can get 5 minutes of gameplay? Especially if you have nothing to report afterwards. The whole point of E3 is to announce new IP, returning and revamped IP, and have news go out to the masses. You can’t really do that and have relevant information as an attendee.

Nevertheless, E3 is an incredible experience no matter what kind of pass you have. Just being in the convention center is a special time, where you can be with people who share the passion of gaming with you. So, without further ado, let’s go over some of the awesomeness that is E3 that I was able to experience as an attendee.

Arrival – I got to the LACC as early as I could, seeing as I had to get my badge still. I arrived at 730am, and was able to get my badge at 8am, allowing me to wander a little and take some photos before the crowds came in.

I was able to meet up with Patrick Scott Patterson for a brief talk very early on, which was fortuitous, considering he was in charge of the E3 Twitter Takeover, so I knew he’d be busy for the week. Still glad I got to see him this year again, and also meet his cool wife who was able to come this year as well.

The floor in the South Hall entrance was covered in displays, like this one from Halo…

…And this epic display from Dark Souls III.

Outside of the West Hall entrance were displays for Extra Life —

And Into the Pixel, which had some amazing pieces of art.

If you're at #e32015, make sure to check out Into the Pixel near the west hall. It's amazing artwork. 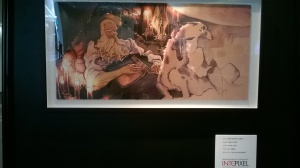 As it came closer to the opening of the show, I was able to meet up with my friends from Senshudo TV. If you’d like more in-depth interviews and coverage, you’ll want to head over to their site HERE.

I decided to head into West Hall first since that’s where Nintendo was located, and I hadn’t been to their booth either time I had been previously. The lines crowded up pretty quickly behind me.

At last the doors opened, and I made my way to Nintendo. Once there, I was able to play Zelda Triforce Heroes with nobody in front of me. That was a LOT of fun, but you definitely have to play with people, as it’s a team game. Unfortunately, I do not have a 3DS/XL, so I’ll have to wait awhile on this.

After I had finished the Zelda demo, all the lines were completely crowded, so I went ahead and checked out the show being held on Mario Maker.

After the demonstration, I wandered around for a bit, but didn’t want to commit to any lines. So, I took pictures instead. 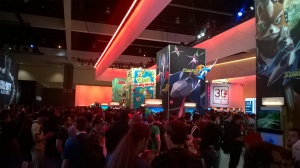 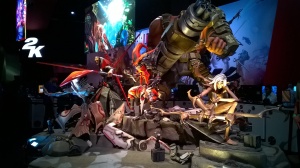 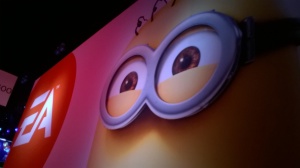 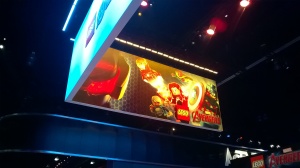 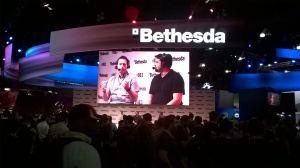 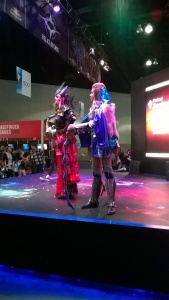 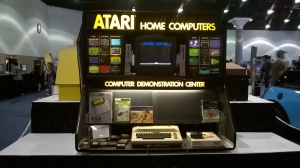 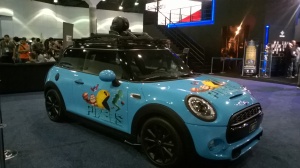 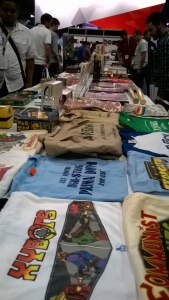 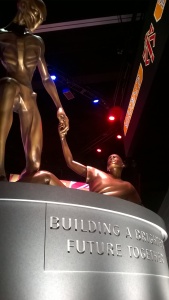 Finally, I stopped wandering the halls for a bit to play. I entered a competition with Samsung on the game Asphalt 8. I have a Windows phone that I really like, but I gotta say, the Samsung Galaxy 6 Edge is pretty snazzy.

Afterwards, I left just to rest my feet for a bit. Don’t want to overdo it on the first day, regardless of Media or Attendee. That’s something I learned the hard way the first year I went.

Okay, so I totally overdid the walking on the first day. But I figured I’d walk less on the second day. I went for Payday 2 first, since it’s in the lobby before the entrance. I’ve never played either Payday 1 or 2, but I was aware of the premise. I had more fun than I probably should have robbing a casino.

Headed over towards the Fallout 4 area, since it wasn’t quite as packed, and got a good picture there.

I then proceeded to Guitar Hero LIVE, where they decided to put me on the main stage because of my “rockin'” hair. lol

I also played some Lego Marvel Avengers. It plays like any other Lego game, but with the Avengers. Still, Lego Hulk was totally awesome.

I then proceeded to go back by Nintendo, to see if I could actually play any other games, and caught them setting up these nifty puppets. It got way too crowded way to quickly for me, so I ended up leaving. I’m kicking myself for that now, because Shigeru Miyamoto actually came out, and I’ve been wanting to meet him for most of my life.

Then I wandered a bit more for some other photo ops. 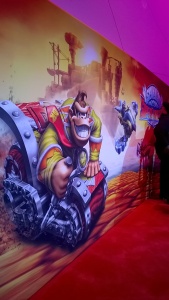 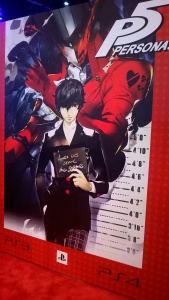 After trying to pick up any semblance of respect I have for myself, I played this really cool game that I don’t think I’ll ever be able to pronounce correctly. (It has a whole function just for cleaning the blood off your weapons, which is nothing but cosmetic. It’s great.)

And I talked with the composer and a dev from Whispering Willows, which looks like an AMAZING indie game (available on Steam now). 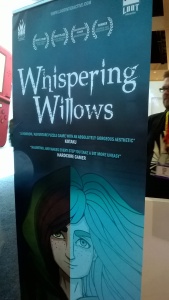 And that ends Day 2. I walked a lot.. again… and I have a feeling that my feet were planning a rebellion.

I was determined to AT LEAST play Mario Maker on the last day, so I headed over to Nintendo first. Lo and behold, I got to play Mario Maker, as well as Yoshi’s Wooly World…

AAAAAND I GOT TO MEET CHARLES MARTINET, VOICE OF MARIO! Yay! This alone made my day, but I had more to do.

Unfortunately, the halls were filled with zombies all week. Oh, did I not mention that? Yeah. Zombies. From ‘The Walking Dead’. All week. And it seemed as if they were targeting me all week. I know they’re just people in makeup, but they were so damn convincing that it creeped me out anyway. Regardless, I finally worked up the nerve to try to capture some shots.

Trying to remain calm through the leagues of zombies I had to pass by, I finally made it to the floor again to play some Harvest Moon: Seeds of Memories. It takes a bit from each HM game, but really draws from the original SNES version, which I like.

#Natsume #HarvestMoon #e32015 So fun! Very reminiscent of all past harvest moon games, but especially the snes version.

Then I crossed over to play a mobile turn based game called Relics of Gods, which was also good.

I stopped by the IndieCade, and checked out some awesome games there like Ko-op Mode and Apartment. Both seem pretty cool. Right next to that was Civilization Beyond Earth: Rising Tide, which I watched a presentation for.

I ended the day with a little game of Minions. It was… alright. This was probably my least favorite game of E3, just based on the fact that it seems like a petty cash grab from EA. But, y’know, Minions are awesome.

Even the minions are tired. #minions #e32015 #endoftheday

Thus ended E3. And I’m ok with that because my feet tell me so. I covered a lot of ground as an attendee, but I don’t think I got to actually get into any games as much as I did with my media badge. Either way, it was a great show, and I can’t wait to see what next year has in store!

Myssiing is an avid gamer who wants to change the stereotype of gaming. Gamers are no longer just kids or basement dwelling adults. Her goal is to inform others about the goings-on in the gaming industry itself, as well as raise awareness to parents and the uninformed on topics of ratings, stereotypes, and social issues concerning gaming. http://about.me/myssiing
View all posts by Myssiing »

← Nailing things down
There are Ratings for a Reason – Gamer Parenting →