← There are Ratings for a Reason – Gamer Parenting
Move over, Facebook. There’s a new PLAYER in town. →

Oversexualization in Entertainment – Are we doing it to ourselves?

Everyone who is a gamer is familiar with the “misrepresentation of women” conversations that have been going on for years. In the last couple of days, I’ve found a few different articles that have somewhat irked me with the way the conversation is presented. And, honestly, I don’t think complaining about it really does any good in the long run. Let me explain.

I woke up, got my coffee, and started reading this article from Moviepilot. (Granted, this isn’t a video game, but it is about Suicide Squad which I’m sure they’ll be making a game of someday, so I’ll allow it.) From what the article says, some actress I’m not really familiar with is going off about the oversexualization of women in the comics industry, specifically female superheroines, even though she’s one of the cast members of a comics based movie called Suicide Squad.

The comments section wasn’t as bad as I had imagined, but it still carried its fair share of misogynist and feminist arguments and petty jabs, mostly along the lines of “girls rule and boys drool” and “go make me a sammich”. Only a few people (myself included) pointed out the fact that it’s not just the women who are being oversexualized.

Which is why I was somewhat irritated with this other article about E3. While I’m totally jazzed that female characters are becoming more than just the white mage or the damsel in distress, you can actually find quite a few awesome females in gaming, and have been able to for awhile. Granted, the number of females is vastly outnumbered by the males, especially when you consider that almost half of gamers are females. But what the article highlights as well is the oversexualization of females. Sweet, Lara Croft found a jacket and got a breast reduction, but did Kratos lay off the steroids?

My point is, while there are fewer females to compare in video games, men are just as oversexualized as the women. 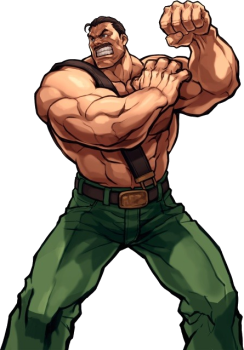 I don’t know ONE guy who looks anything remotely like this. So it’s not just a problem with the women.

The problem is with us.

Let me put it this way. A lot of the guys I know play females in certain games because they’d rather look at the girls’ butt than the guys’ when the camera angle is behind the character. Makes sense. In other games, my friends get to design their characters, and almost always, they create them in a way that represents a facet of themselves they want to indulge in. Playing a warrior? Let’s make him beefy and strong. He doesn’t take any crap. Even when I make female characters, I’m usually a huntress or archer of some sort, and they end up being thin and fit because, hey, they have to be fast and quick on the draw. So why not make them good looking too?

Bottom line: I’d rather play as this –

And until people stop buying games that objectify both men and women, they’ll keep making them. The voices for both sides are getting louder, and the industries are listening, but a real protest is done with the almighty dollar. And let’s face it, we know what sells.

Myssiing is an avid gamer who wants to change the stereotype of gaming. Gamers are no longer just kids or basement dwelling adults. Her goal is to inform others about the goings-on in the gaming industry itself, as well as raise awareness to parents and the uninformed on topics of ratings, stereotypes, and social issues concerning gaming. http://about.me/myssiing
View all posts by Myssiing »

← There are Ratings for a Reason – Gamer Parenting
Move over, Facebook. There’s a new PLAYER in town. →